A selection of recent articles and reports:

David Richens, a member who lives in Wooler, has the following sighting report

We have had a modest murmuration overhead in our street in Wooler for the last few days. It starts around 4pm, only about 2000 birds although it is getting bigger all the time (usually we have about 10-20 residents). After an insane sky dance for around 30 mins they dive bomb at speed into the hedge alongside our drive, where they chatter for a while and then quietly roost overnight. When I go past in the dark the whole hedge rustles and shakes a bit plus the odd flapping noise but otherwise there is no sign that they are there 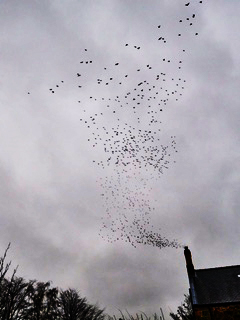 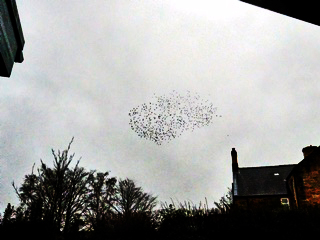 ESCAPE TO THE ‘QUEEN of the HEBRIDES’

In September 2020 we booked a holiday cottage, hoping that the ‘third time-lucky-rule’ might make up for two earlier holiday bookings which had already fallen under the wheels of the Covid-19 Juggernaut. We finally set off, having survived the  anxious “can we/can’t we go?” agony of daily  changes to restrictions both sides of the border! Not even the weather forecast for rain throughout our week, or the risk of the frequent and  infamous ‘Rest and be Thankful’ landslides blocking our route (which would add  an  extra 60-mile detour to our route) could deter us.

Our destination was the beautiful Isle of Islay, the southernmost of the Inner Hebrides. Lying about forty miles by ferry west of the Mull of Kintyre, Islay is renowned for its birds during the winter months, particularly as it is the first port of call for tens of thousands of Geese and Swans migrating from such places as Iceland, Greenland and Svalbard. Some use it as a stopover en-route to the Solway or Ireland*, but many others overwinter in the lochs and fields of this gem of an island, which rarely freeze over thanks to the Gulf Stream. Islay is nearly split in two by two large sea lochs, Loch Gruinart facing north and Loch Indaal facing south separated by a low-lying land bridge around two miles wide. There are two large nature reserves on the island, which are both owned and farmed by the RSPB to benefit the geese and other wildlife.

Our first outing was to the RSPB reserve at Loch Gruinart, a very shallow inlet which fills and empties twice a day exposing a large expanse of sand and mud (imagine Budle Bay with the tide out!)  As you approach, every field is full of Barnacle Geese feasting on the lush grass, but there are always a few keeping a wary eye open for threats and predators- an eagle, or a visitor’s dog for example. They seem to operate on the principle ‘one-up, all-up’! Here and there you find smaller groups of other geese   such as the Greenland White-fronts or the Greylags. Always, there is the continual sound of thousands of ducks, geese and swans, music to our ears! 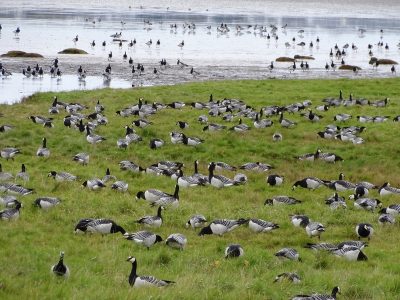 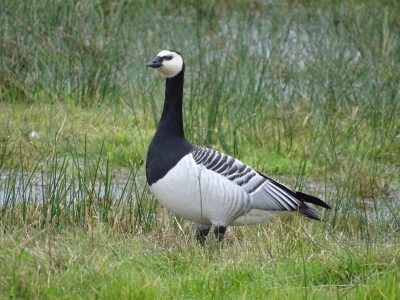 The reserve has trails to follow and a couple of hides overlooking the flood-meadows, all set up with clear directions and Covid-19 instructions. The South Hide had more geese and swans and several species of duck to observe at close quarters. A ringtail hen harrier caused a stir as it flew low across the area, a real thrill to watch! We continued to the North Hide, with Curlews, Lapwings, and a lone Black-tailed Godwit feeding alongside the waterfowl. Subsequent visits with varying water levels provided other birds, a flotilla of Shovelers say, or a group of Pintails. Further out by the little channel draining the loch three hundred Golden Plovers and little groups of Dunlin provided further interest. As we arrived at the Gruinart car park on another day, a White-tailed Eagle perched on a fence post was mentioned by someone returning from the nearby Viewing Platform, which we reached in an amazing 30 seconds…….. to learn from another birder that it had just flown! ( an ‘if only’ moment………)

Loch Indaal is a deeper sea loch providing a rich variety of habitats. From the road which hugs the northern shore you pass by a shallow, muddy ‘smelly corner’ and bay, a sandy beach, a rocky headland, and a rocky shoreline all within a mile or two. Large gatherings of ‘Barnies’ were always to be found at various points along this stretch of coast. On the mudflats we watched nearly fifty Pale-bellied Brent Geese feeding, and a long line of Golden Plovers on a ‘bar’ a little further out. Further round the head of the loch, we came across a little party of 14 Scaup quite close to shore, including several colourful males, and about 60 common scoter a little further out. On the sandy shoreline, many of other ‘familiar’ waders such as Bar-tailed Godwits, Dunlin, 40 Ringed Plovers and several Turnstones were feeding. Although Divers are likely in this area, it was Claggain Bay on the sheltered East Coast of Islay where we had fabulous views of three Great Northern Divers, close to the shore. One was still in full summer plumage, the other two moulting into their winter ‘gear’. 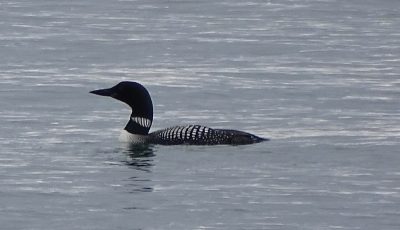 Another amazing location close to Gruinart was the little freshwater Loch Skerrols, largely enclosed by mature woodland. This held about 100  Whooper Swans, adults and their young still in their family groups, 70 Greenland White-fronted Geese, and many Wigeon. 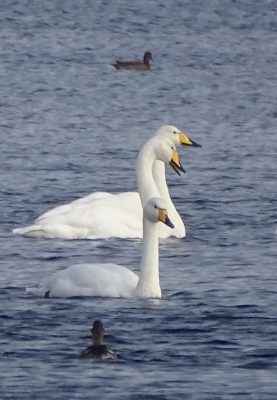 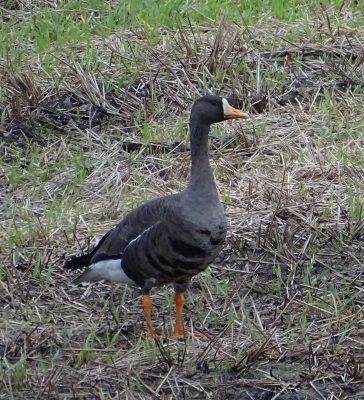 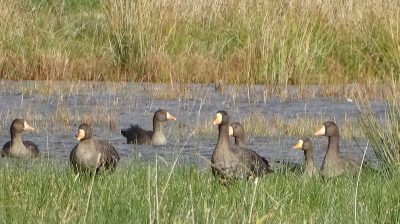 Approaching quietly and discreetly, the soundscape is quite magical, the whoopers engaged in continuous ‘conversations’ and the Wigeons whistling to one another. When new  families of whoopers arrived, the swans would get very excited and “whoop” in great delight.    In the morning we would often see a several lines of 9 or 10 Whoopers departing by flying on over our cottage heading south, possibly heading on to Caerlaverock on the Solway, Martin Mere in Lancashire or Lough Neagh in Northern Ireland: they don’t overwinter on Islay!

The other RSPB Reserve lies on a rocky peninsula at the south-western corner of Islay called the Mull of Oa. One might hope to see Golden Eagles here on the high cliff-bound crags, but even visiting on what was the ‘best day’ of our unsettled week, the tops were shrouded in mist and no eagles were seen. The Choughs, for which Islay is one of only two remaining breeding sites in Scotland for this attractive corvid, failed to appear during our walk despite hearing a single (but unmistakable) call. However, as we were returning to the car park, we suddenly heard another call and checked out a couple of distant birds on a little grassy knoll…..Bingo! The scope was soon focused on our foraging birds and we enjoyed watching their industrious prodding of the mound for about twenty minutes whilst we had our sandwiches!

We also enjoyed the spectacle provided by other birds, impressive numbers of Scandinavian Thrushes such as Fieldfares and Redwings passing through, a murmuration of Starlings and lots of little birds such as Reed Buntings, Linnets, Robins, and restless little flocks of Twite. Our final afternoon we spent walking round the Ardnave peninsula with inspiring views to the Paps of Jura, Colonsay and Mull. This is another favoured area for Choughs, but it was the Ravens who kept us company until we returned to the parking area (now devoid of people as the light faded) when we were delighted to be entertained by a flock of 15-20 Choughs calling and tumbling in the air over the low sand dunes, landing to probe the grassy sward and taking off again- a fitting ‘finale’ to our week on the ‘Queen of the Hebrides’. 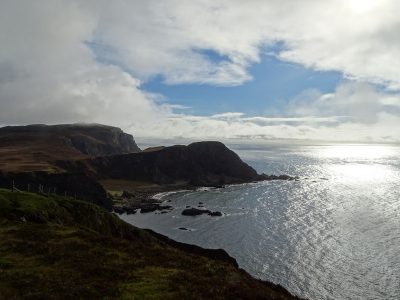 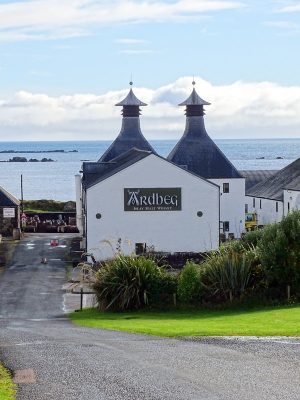 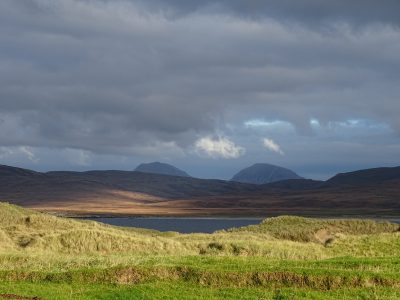 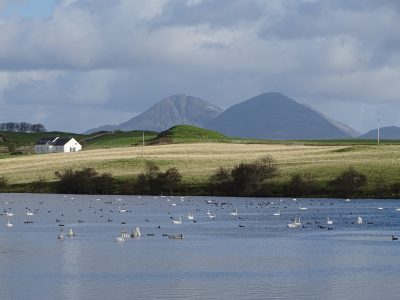 The Farnes Islands – July 2019 with Alison and Stewart

Alison and Stewart had a visit to the Farnes this July and Alison shares some of her great photos with us. They were very pleased to see young terns, razorbill and a puffling. 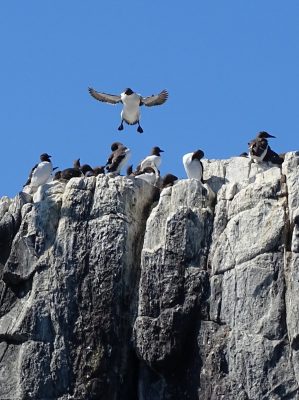 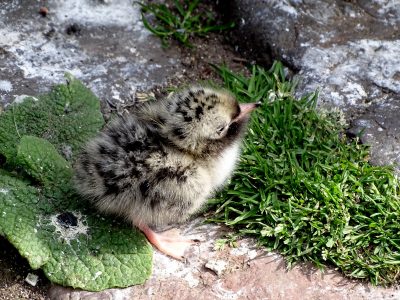 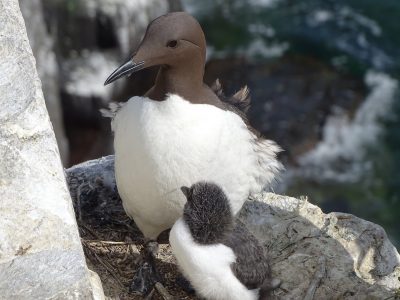 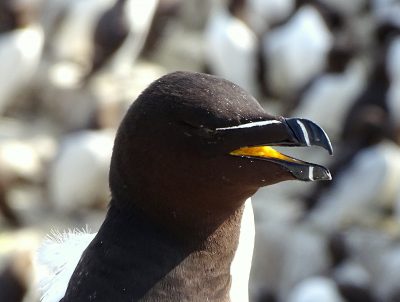 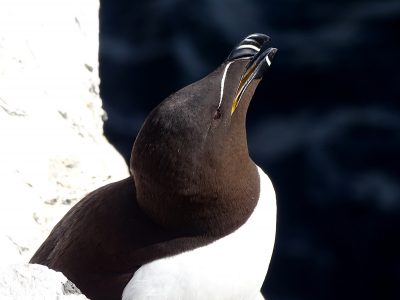 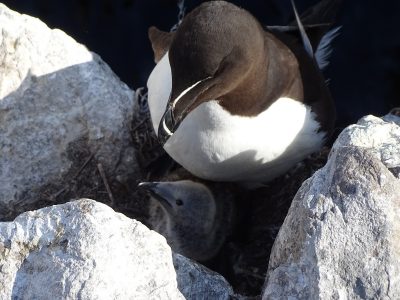 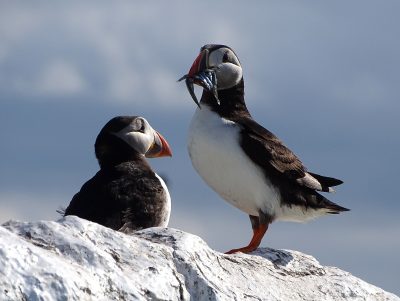 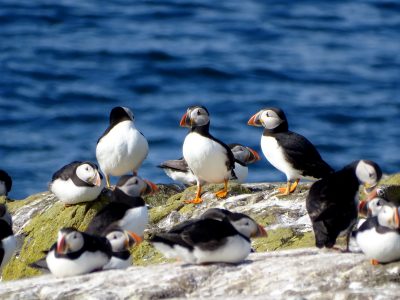 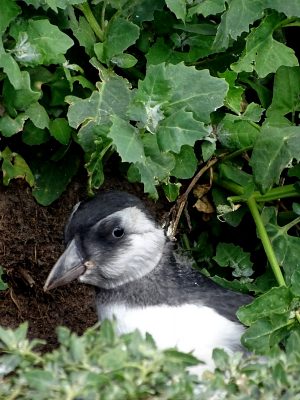 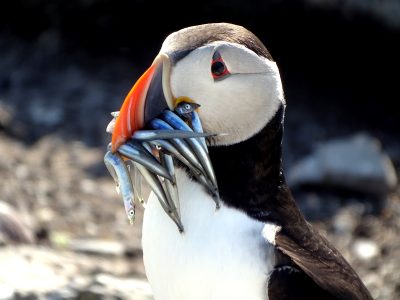 Ospreys in the Borders : A Visit to see Ringing July 2019 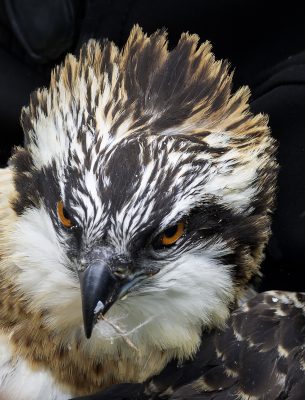 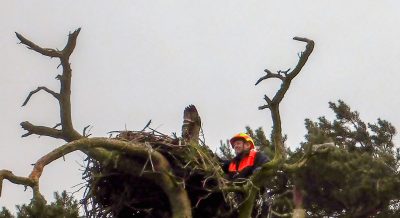 A North Northumberland Bird Club Trip to Spain in May 2019

NNBC Trip to Etremadura and the Gredos Mountains 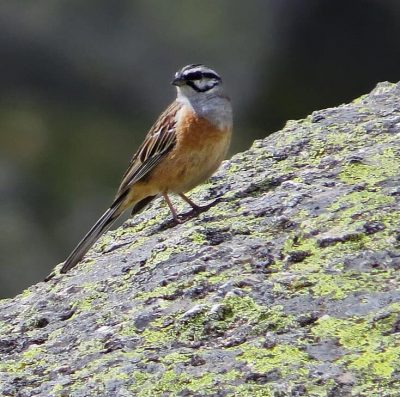 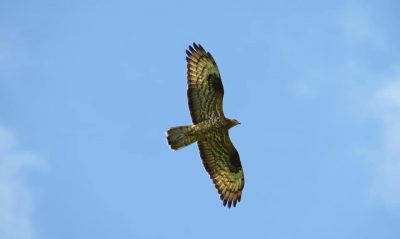 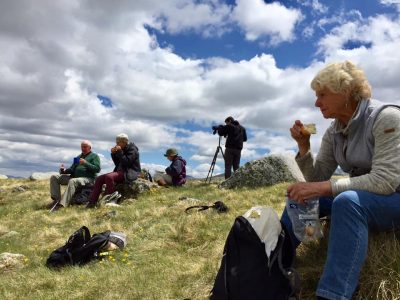 David Richens trip to Sri Lanka – to the little visited area of Mannar as well as more well known regions.

Why would you visit Japan in Winter? An illustrated article by Stewart McCormick describing the rich rewards of a Birding Holiday in the snowy depths of winter when the temperature can drop to -20 degrees Centigrade. More…

A North Northumberland Bird Club Group organised by Liz Harrison had a wonderful week in Bulgaria timed to coincide with the Autumn Migration in late September. More…

Sunrise over the Black Sea

Yearlebirder reflects on a holiday seeking out the colourful endemic birds of Jamaica. More… 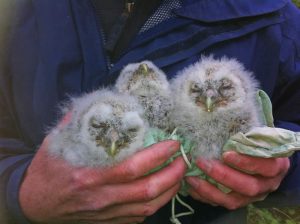